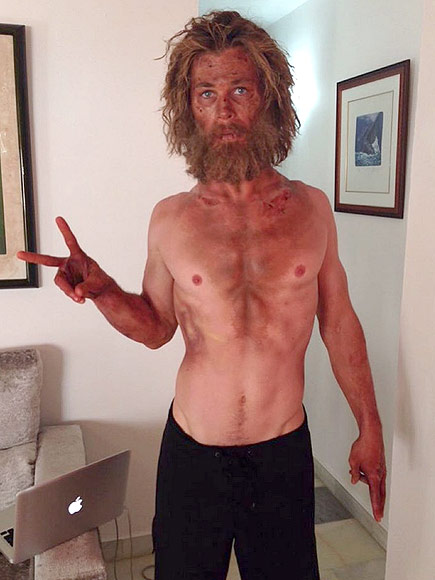 Where did Chris Hemsworth go?

Hemsworth took to Instagram on Sunday to reveal his dramatic weight loss transformation for his upcoming film In the Heart of the Sea, adding that he consumed as few as 500 calories a day to prepare himself for the role.

The Australian actor, 32 – who is known for his fit physique and even landed PEOPLE's Sexiest Man Alive title in 2014 – looked especially frail in the picture, showing off his ribs as he sported a scraggly beard and cuts on his chest and face.

Hemsworth revealed that in order to film the shipwrecked scenes, he had to go on strict diet to drop the pounds.

Keep up with Chris Hemsworth in the pages of PEOPLE Magazine by subscribing now.

In the Heart of the Sea follows the doomed crew of the whaling ship Essex after it is assaulted by a massive whale in 1820 – a true story that formed the basis of Herman Melville's classic novel Moby Dick.

"We have to shoot the really skinny stuff where we drop down to 500, 600, 700 calories a day, a good three or four weeks and it's going to be pretty uncomfortable, but we'll be together in our misery," Hemsworth toldEntertainment Tonight at the time. "I spend more time thinking about food than anything else at the moment."