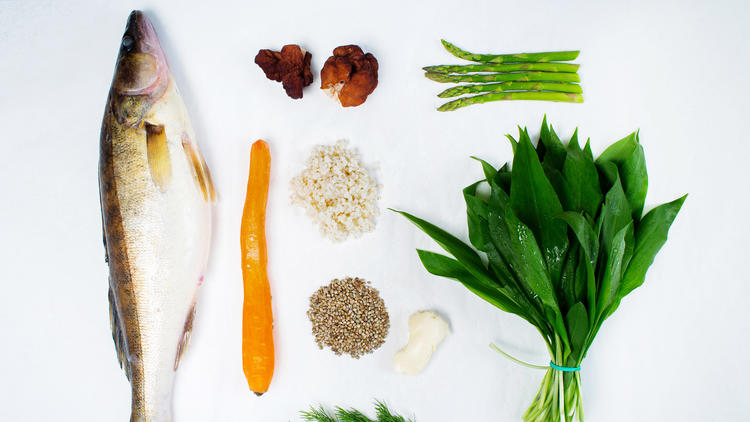 A Mediterranean diet high in fish and low in meat is associated with brain health, according to a new study. (Getty Images)

Following a Mediterranean diet high in fish and low in meat may slow down the signs of aging in your brain, according to a new study.

Researchers found that among 684 elderly people with an average age of 80, those who stuck more closely to a Mediterranean diet that includes lots of vegetables, legumes, cereals, fish and monounsaturated fats such as olive oil, had larger brain volumes than those who did not.

When the study participants were divided into two groups -- those who adhered more closely to a Mediterranean diet, and those who did not -- the difference in average brain size was 13.11 milliliters, or the equivalent to five years of aging, the authors reported.

"In general, people's brains tend to shrink with age and this can be associated with cognitive impairment and Alzheimer's disease," said Yian Gu, an epidemiologist at Columbia University and the lead author of the paper.

"Our study found that the more you adhere to the Mediterranean diet, the more protection you get for your brain," she said.

The findings were published Wednesday in the journal Neurology.

This study follows one by the same group that found adherence to a Mediterranean diet is also associated with reduced risk of Alzheimer's disease.

Other research has shown that following the Mediterranean diet, which also includes less intake of meat, dairy and saturated fats, is associated with reduced risk of breast cancer and can halve the risk of heart disease.

In the most recent study, Gu and her colleagues were specifically interested in looking at the brains of healthy people who had not been diagnosed with dementia. The research team collected information on the multi-ethnic participants' diets, and also asked them to undergo an MRI scan. All participants hailed from northern Manhattan.

The health benefits of the Mediterranean diet are increasingly well known, but researchers are still not certain why the diet is so advantageous.

"It has been suggested that multiple mechanisms are involved," Gu said. "This assortment of foods have different nutrients that can have different biological effects in the body."

She added that though her study shows a strong association between following a Mediterranean diet and brain health, she cannot yet issue an official recommendation.

The study was cross-sectional, meaning it allowed her team to compare two groups of people in a single moment in time. In the future, she said, she would like to see a longitudinal study that follows people over time.

"We don't know why the brain atrophies in older age, but if we can find some factors that are not genetic, that people can change in their own lives to protect themselves and prevent disease, that would be a very important message," she said.

This Article was Originally Published on Los Angeles Times